When we acquired Sanctuary in 2004, she had no windlass.  At that time, she was fit with an OEM-provided 35# Danforth-style anchor, fabricated of SS for appearance.  The anchor was fit with about 6′ of 3/8″ chain attached with a solidly rusted 7/16″ shackle.  There was no swivel.  Attached to the other end of the chain, also with a rusted shackle, was a length of about 200′ of somewhat worn, 3-strand, 5/8″ nylon line.   Sanctuary also carried a 30# CQR-style knockoff anchor aboard, stored in the bilge.  The previous owner/seller told us that he essentially never anchored; “maybe once,” he said, “in 6 years of ownership.”

Ground tackle immediately became an issue in our pre-purchase survey.  We knew we wanted, and expected, to anchor out.  We agreed with the surveyor that the then-existing ground tackle was inadequate for the boat.

Immediately upon purchase, we fit up a new Simpson-Lawrence H900 windlass (600 watt) and 250′ of 5/16″ BBB chain.  At the time, the windlass was available on-the-shelf at what was at the time a favorable price.  The chain was selected because it fit the 8mm wildcat of that available windlass.  We would make different choices today.

As part of the windlass install, we also replaced the pretty SS Danforth-style OEM anchor with a 35# “genuine” CQR and added a 5500# WLL swivel, obtained from Fisheries Supply in Seattle.   Although this selection of equipment falls within the guidelines of ABYC H-30 for Working Load Limits (WLLs) for Sanctuary’s windage profile, in hindsight, I would prefer a greater margin of WLL capacity for the chain.

The 5/16″ BBB chain weighed just over 1 pound per foot, so 250′ of chain added about 300# to our forepeak.  To adjust the boat’s trim for that weight, the weight of a genset that we added at that same time, and the natural bow heavy trim of Monks, we added 1000# of lead ballast in the aft mechanical space, behind and below the master berth.

Then one summer day at St. Michael’s, MD, we had the pleasure of meeting an experienced cruising couple aboard their Monk 36′.  They invited us for a tour of their boat, and we liberally adopted (read: stole) several ideas.  One was that we mounted a 1/4″ SS plate on the port flybridge rail.  On it, we hung our SS Danforth fit with a hybrid rode of the 6′ of chain and 250′ of 3-strand nylon line.  That was a definite improvement in accessibility of that “backup” anchor.  Stored in that location, it was fairly well out of the way yet also quite reasonably accessible.  It could be deployed quickly either fore or aft.  It was cumbersome to handle, deploy and retrieve, so although a workable solution, it was still not yet as optimum a rig as we wanted. 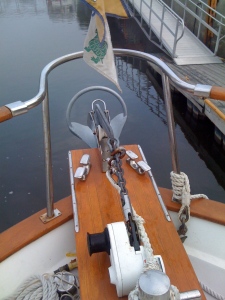 Over time, we had our share of difficulty getting our 35# “genuine” CQR to set.  Once set, though, that anchor never failed to hold us.  We did worry about it, though, and there were certainly nights that we didn’t get much sleep.  In 2009, we upgraded the 35# CQR to a 45# Manson Supreme.  The Manson Supreme is, indeed, “supreme.”  It sets immediately and positively.  I would never consider going back.  With our Manson on duty, we sleep very well.

There are two things I suggest any prospective Manson or Rocna buyer check before dragging one home.  First, these anchors have a shank that is made from plate steel vs. a forging.  The steel plate is thinner in its width dimension and taller in its height dimension than comparable CQR, Danforth and Bruce fluke or plow-style forged shank anchors.  That high rise shank will not fit in some bow roller assemblies originally made to accept lower profile forged shanks.

So the first thing to do is verify that the bow-roller will accept whatever anchor you decide to install.  This caution is especially important for fully enclosed fiberglas bow pulpit designs; those fabricated of fiberglass and molded as a continuous extension of the foredeck.  I was easily able to adapt Sanctuary’s bow roller using a SS bail from a sail boat’s boom.  Second, the angle that the spade makes to the shank where they are welded, and the length of the spade tip itself, is such that the anchor roller may need to be re-positioned slightly farther forward to avoid interference between the spade’s tip and the forepeak of the vessel. 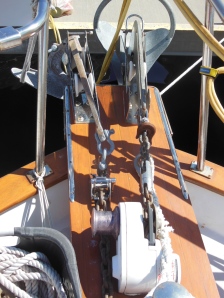 Aboard Sanctuary today, we have fit a second bow roller, very similar in design to the OEM unit.  It is manufactured by Vetus/Maxwell, model OBELIX, at an Internet cost of around $275.  Our primary anchor now is the 45# Manson Supreme; probably around $450 today.  On the second bow roller, we’ve permanently mounted our old 35# CQR.  Our Manson Supreme is on an all-chain rode attached to the anchor shank by a SS toggle, not a shackle.  The CQR has 8′ of 3/8″ chain leader, then 200′ or so of 3-strand nylon.  Until it’s necessary to re-galvanize the chain, we plan to leave the existing BBB in place.  At that time, we expect to change the wildcat and upgrade to high-tensile chain.  The primary (chain) rode is stored in the boat’s chain locker.  The 3-strand nylon is stored on deck in a basket.  Not elegant, but I’m thinking out better ways.  The Danforth is on the flybridge rail, still accessible and available, as a tertiary backup.