Sanctuary and crew cruise mostly on the US East Coast, where water depths for anchoring in-the-main range from 12 to 25 feet.  Sometimes more, sometimes less, but a working average of 15 feet.  The deepest water in which we have anchored was outside Boothbay Harbor, Maine.  I think our “record” was in water depths of 56 feet at low tide with a 12 foot local tidal range.  These are not big numbers compared to the Pacific NW.

When we anchor, I put out a minimum of 4:1 scope, and my preference is to put out more.   Our rode is all-chain.  That scope is my precautionary approach against something changing in the overnight hours when I may be less alert and too slow to appreciate and respond to rapidly changing/deteriorating conditions.

When we first began full-time cruising, we depended on Skipper Bob Cruising Guides for the Atlantic Intracoastal Waterway (A-ICW).  Skipper Bob suggested using triplines in areas of the Carolinas and Georgia, where underwater hazards included numerous deadfalls and stumps.   The first couple of years we cruised, I avoided anchoring in those areas.  I was afraid of the hassle and unsure of my skill in freeing myself from a snag.  But, we really liked the quiet and beauty of that area, so I decided to build and experiment with a tripline, and learn to use it, so we could feel confident anchoring in that region.

Our “proof-of-concept” assumptions for the tripline were twofold.  First, we knew the tripline would be useful in freeing an anchor snagged on some invisible underwater hazard.  Second, we thought it would signal the location of our anchor to other boaters looking to place their own anchors; “mark our swing circle,” as it were.

I designed our trip line to be self-adjusting to accommodate average East Coast tidal ranges.  One end of the tripline was permanently attached to the anchor, and the fly end of the tripline ran through the loop on a red float ball.  The fly end was permanently secured to a 1# lead fishing weight.  The size of the weight prevented the line from running back out of the float’s attachment loop.  As the tide fell, the weight fell by gravity to hold the ball floating centered over the anchor.  As the tide rose, the weight rose by the buoyancy of the float ball.  That held the ball floating on the surface of the water, centered over the anchor.  The line itself was 3/8″ nylon, 30′ long.  The system worked fine in water depths ranging from 12′ to 25′.  In waters less than 15′ deep, the weight would come to rest laying on the sea bed, but the ball would stay very close to the anchor’s position.

My design worked to keep our tripline float located immediately above our anchor.   Deployment was easy; we just threw the ball over the side after the anchor settled onto the seabed.  Retrieval was also easy; we’d just allow the anchor to come up and then catch the tripline.  Both tasks were easily managed from our foredeck.

I made it a point to use the tripline virtually every time we anchored for about one full cruising season.  That season included a 1400 mile southbound migration from Baltimore to SW Florida, and the 1400 mile return to Baltimore the following spring.  I never did actually need the trip line to free the anchor from a snag.  OK, I grant that’s not valid in evaluating the usefulness of the tripline for freeing a snagged anchor.  The idea of the trip line is for it to be there IF AND WHEN it’s needed.  We can certainly agree, it isn’t going to be needed very often.  However, our “proof-of-concept” trial didn’t work out as well in practice as I had hoped.  While we were using the trip line, we also encountered some significant disadvantages (risks) to having it deployed.

One realization was that the only time a tripline float helps other boaters understand our true swing circle is if wind and currents are up a bit.  In gentle to moderate breeze conditions (Beaufort 3-4), the rode becomes stretched out to the point that the bulk of the rode is lifted off the sea bed in resisting the drag forces on the boat; not taut, but stretched out along its entire length.  But in calm conditions, anchor chain lays on the sea bed.  With the rode laying on the sea bed, the swing circle appears rather smaller than it really is.  That is particularly true in deeper water where the length of the scope triangle’s hypotenuse becomes increasingly significant. 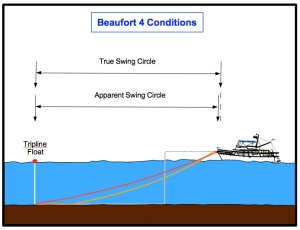 In calm conditions, the boat is typically held to the sea bed by the weight of the chain, not by the anchor itself.  The natural chain-fall location is the point at which the rode comes to rest on the sea bed after relaxing from the mechanical load of setting the anchor.  In my experience retrieving our anchor after a calm overnight, the chain usually comes up in an “S” pattern, formed by the movement of the boat in reversing tidal currents.  The result is that the boat never moves through it’s true swing circle. 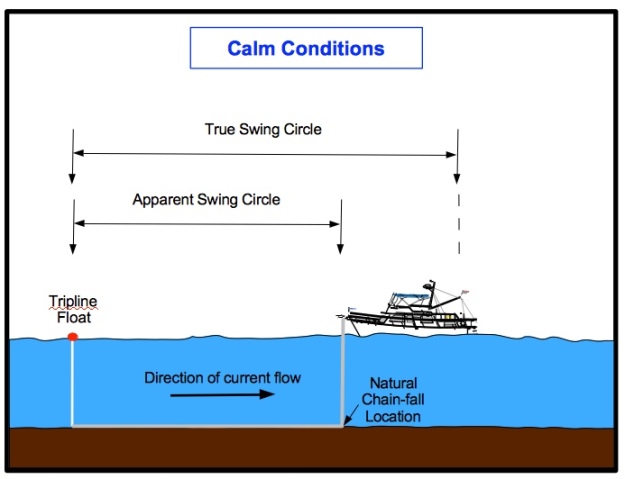 In calm conditions, when tidal current reverses after slack, our boat will simply “pivot”  around the chain-fall location.  At that time, the tripline float will be positioned aft of our boat.  In that location, it’s hard for others to even be sure the tripline float is our’s.

As the strength of the flow of the reversed tidal current increases, there will be a time when the chain’s weight alone can’t hold the boat, and the chain gets partially pulled back on itself; that is, pulled away from the natural chain-fall location and towards the position of the anchor.  Thereafter when the tidal current reverses again, the boat will pivot back and be pulled slightly back away from the anchor’s position.  While this is happening, the tripline float often winds up aft of, or alongside, the orientation of the boat on the surface of the water.  Occasionally, we found our float would wind up under our own swim platform, snagged on one of the support brackets.  That never actually caused us to unset ourselves, but it certainly could have.  We have friends on a Monk 36 who unset their own anchor that way, in a t’storm, in the dark, at 03h00.

Furthermore, we discovered the hard way that the presence of the float ball does not stop it from being “run over” by other boats moving through an anchorage.  We had that happen twice in the year of our “proof-of-concept” trial.  Once in Georgetown, SC, a sail boat came through the anchorage looking for a spot; 15h00 on a sunny afternoon.  The person on the bow was fully occupied sorting out his ground tackle, not at all focused on keeping a lookout.  The helms-woman probably could not see our red float ball from her cockpit helm station.  Poof, they ran over our float.  On another occasion in South Florida, we were preparing to depart our anchorage, just before dawn, in pre-dawn low light.  A neighboring boat was a few minutes ahead of us with their departure preparations.  When they motored out of the anchorage, they ran over our float.  Fortunately for us, neither of those incidents snagged our float or unset our anchor.  But no matter our good fortune, had they snagged our float, we would have been the worse for their inattention.

So, it’s only some of the time – probably a relatively small percentage of time – that having a tripline float is actually helpful to others in understanding our true swing circle.

I do not like lying over another boat’s rode and I work very hard to avoid that.  I think most boaters feel that we’d be way too close to them if we were lying over their rode.  I would not want another boat to swing over our tripline ball, because of course, that risks unsetting our anchor.

So it is true that a tripline float can reliably mark the position of the anchor in the sea bed.  Whether that is helpful to me or others is less clear to me.  There are times when it may help, other times when it does not.  The real key to seamanship in anchoring is to honor the location of boats that are already settled in the anchorage.  Stay an appropriate and suitable distance away from others in anticipation of the possibility of fast changing wind and weather conditions.  That decision requires seamanship skills, forethought and high value of personal courtesy to strangers.  Sometimes, it means moving on, which we do if we can’t be certain we have safe swing room.  After all, a t’storm in the middle of an otherwise calm overnight changes all appearances and risk assumptions.  If a t’storm were to move through when the tripline float is snagged under the swim platform, that could easily become a perfect storm of undesirable coincidence and unwelcome outcome.

Conclusion: I gave up on using the the trip line.  Ultimately, I decided the benefits weren’t worthy of the risks.