There is little to nothing to attract the cruising and destination interests of cruisers on the Delaware Bay.  There are no cute towns or significant points-of-interest to visit and enjoy.  The Delaware Bay is largely an “obstacle” to be transited en route between the Chesapeake Bay and New York harbor.  The normal route for cruising boats to transit the Delaware Bay is from the eastern end of the C&D Canal in the Northwest to Cape May Harbor in the Southeast.  For the cruiser transiting Delaware Bay, this route is about 60 Statute Miles of mainly open water. The upper bay has the character of any wide river, but the lower bay is an expanse of open, shallow water.  At its widest, the lower Delaware is 27 Statute Miles wide between New Jersey’s south coast to Delaware’s north coast.  The route for cruising boats will be at least 12 Statute Miles off these coasts.  Tidal currents have a dramatic effect on the transit times for all but the fastest of boats.  For slow trawlers and cruisers that travel at 8 – 10 StM/hour speeds-over-ground, the transit can take as little as 6 hours if traveling with tidal currents, or as much as 10 hours if traveling against tidal currents.  PLAN CAREFULLY FOR THIS TRANSIT.

Cruisers must  review the weather forecast very carefully before transiting the Delaware Bay in either direction!  This large, open, exposed body of water lies geographically Southeast to Northwest.  Because of the combination of tidal currents and river flow, ebb currents can exceed 2+ kts, and flood currents can exceed 1-1/2 kts.  Ebbs also last longer than floods.  Even moderate winds from the Southeast or Northwest can create steep, short period, choppy sea states on the Delaware Bay, ESPECIALLY when tidal flow is against the winds.  The Southeastern portion of the Delaware Bay is very wide, so cruising routes are exposed to long fetch.  Even in winds of 10 kts, North or South winds can create nasty beam seas.  There is essentially no place to seek cover along the Delaware Bay.  Don’t misunderstand; the Delaware Bay is a fine ride in settled weather.  Just be prudent in planning for this transit!  If the marine forecast is at all questionable, we strongly recommend cruisers just stay in port.

Check Skipper Bob for timing your departure for the transit between Chesapeake City, MD and Cape May, NJ.  In either direction, If timed right, cruisers can enjoy swift, favorable currents the entire way through the Delaware Bay.  Update as of September, 2019: there is am app for both Android and iOS devices that is very helpful for planning departure times.  The iOS app in the Apple Store is called <East Cst Planr +Currents+Tides>. Here’s the link: <https://apps.apple.com/eg/app/east-cst-planr-currents-tides/id1079430088>.

On the northern end of the Delaware Bay, about 1/2 mile north of the Eastern entrance of the C&D Canal, is Delaware City.  At Delaware City, there is a well protected, very excellent, small, full-service marina, the Delaware City Marina.  There are strong currents nearing the creek, so contact the marina on VFH16 for local knowledge getting in.  DCM offers gas and diesel fuel, pumpout, floating docks, electric and water, clean showers and small laundry.  They have a well stocked ship’s store, an operating boatyard and repair facility, and can haul a boat if necessary.  Delaware City is a small town, walkable from Delaware City Marina.  There is a small groceria for common food needs, but probably not a major re-provisioning.  There are pub-food restaurant options.  This is an excellent, friendly place to wait out bad weather.

At Cape May, there are several marinas and two anchorage areas nearby the US Coast Guard training academy.  We generally anchor in 10 ft in one of the anchorages.  Make sure to honor the channel markers through Cape May, as the harbor itself is generally not suitable in depth for cruising draft boats.

The character of the Cohansey varies greatly. At the Bay’s entrance to the Cohansey, the river is shallow salt marsh.  The river becomes more wooded as one travels up stream.  The better anchoring (water depth, swing room) is in the salt marsh area.  The inland section gets very deep – 35ft to 65 ft – with fast running currents, so finding a place with swing room is more challenging.  The area is abundant with green-heads (horse flies) in the  summer months.  There is a fleet of fishing boats from Greenwich that go out between 04h30 and 05h00 most days.  They will wake (and waken) cruisers.  There are “Harbors-of-Refuge” at Cape Henlopen/Lewes, DE, and at Cape May, NJ.  In my opinion, the anchorage at Ready Island is useful only in settled weather conditions.  I would not want to ride out a hurricane in Cape May. 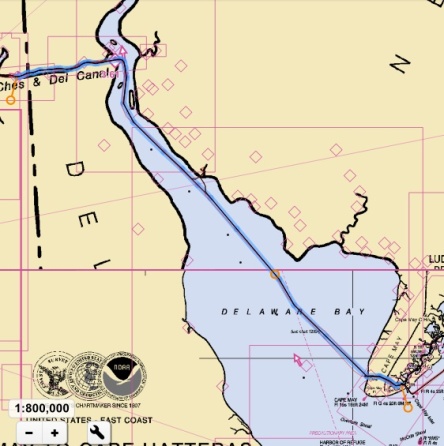 Sanctuary typically transits the Delaware Bay along a rhumb line from the Cape May Canal to the Salem Nuclear Plant.  This route parallels, and is a mile or so “north” of, the charted large ship channel.  Ships traveling in the ship channel will be traveling at speed (around 18 kts), and create large bow and stern wakes which are difficult for pleasure craft sized boats.  Water depths along our preferred rhumb line carry a minimum of 10 ft.  There are oyster beds adjacent to our route, and there are occasional crab pots.  We find that line to generally carry favorable sea conditions, but diligence in watch-keeping is required.